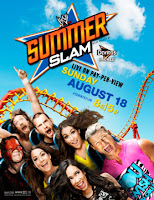 I usually predict PPV matches on Twitter, and I usually do really well, so I thought I would put my full predictions on here too as a matter of record.

I like Christian, he has been a top performer for many many years, but it is too early in ADRs run as champ to change up the belts just yet. I can see RR getting involved in this match too, But Christian will come up just short.

The best versus the beast, it would be pointless for CM Punk to win this, because if he does the feud is over and there is no where really to go. Daniel Bryan is the main guy right now, so CM Punk has to wait a while before he can start a feud for the WWE Title. This means Lesnar has to win this one, to set up a rematch at Night of Champions, I could see this feud continuing through the next few PPVs with the big rubber match being at Survivor Series or perhaps before that at Hell in a Cell. Either way this isn't ending soon, and expect Curtis Axel to sub for Lesnar too in future Raws/Smackdowns etc

Natalya (with The Funkadactyls (Cameron and Naomi) vs. Brie Bella (with Eva Marie and Nikki)
Due to Nikki Bellas injured shin, this will be a singles match, mainly thrown together and added to the show due to the huge success of the Total Divas show, this match could get changed up at the last minute, but if it stays as it is, I expect Natalya could win purely because the next episode of Total Divas features her relationship with Tyson Kidd, otherwise I would pick Brie Bella to win. A bit of a throwaway match so they can film stuff for Total Divas and the extra 3 episodes they just ordered for E!

This should be a good match, both have been built up nicely, one thought I had was that the WHC match goes on first, ADR wins that, and at the end of the match Sandow cashes in the briefcase to become WHC. Rhodes then demands that his match with Sandow then becomes for the WHC, which Rhodes then wins. It would be an awesome twist as well as give Cody a truly amazing moment in his career, as well as give Sandow plenty to moan about and play off in future. Of course that is just fantasy booking and doubt it will happen, therefore I think Cody gets the win, but Sandow is happy still owning the MitB contract.

I expect this to end the feud with Ziggler / Big E / AJ, it has been going on a while now, and it is time for Ziggler to move back into the main event picture. I think this may end up being a short match (unfortunately), but the good guys go over.

Kane v Bray Wyatt
Since Kane will soon be off to film the sequel to his film "See No Evil" it makes sense for Wyatt to go over here, many people expected Kane to join the Wyatt family, but Kane doesn't need to be part of someone else's faction. Kane loses here, and gets storyline injured so he can go make his film, expect to see Kane return for Survivor Series, perhaps alongside The Undertaker to take on the Wyatt family in a match.

John Cena v Daniel Bryan
If Cena wins this match, then that may very well be the stupidest business decision ever made, Daniel Bryan simply must win this match, he has something that Cena has never had and never will, Bryan has the intangible something extra, that thing that Stone Cold Steve Austin had, that The Rock had. Steve Austin broke through because the crowd wanted it, the same is happening with Bryan, however much Vince has tried to bury Bryan, the crowd just refuse to play along, they want him in the main event, and they want him as champion. I expect Bryan to carry Cena to a great match, much like Punk did earlier in the year.

If Triple H and Vince want to make money they need to ride the wave of Daniel Bryan, and let nature take its course.

Email ThisBlogThis!Share to TwitterShare to FacebookShare to Pinterest
Labels: Summerslan 2013