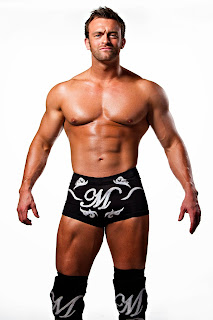 London (Monday December 23, 2013): TNA IMPACT WRESTLING star Magnus has become the first ever Brit to win the World Heavyweight Championship for a major American wrestling organisation, ending a wait of more than 108 years.

His victory was broadcast to millions of people in more than 120 countries, including on Challenge TV in the UK and Ireland on Sunday December 22, 2013.

Magnus will bring his newly-won championship home when he visits five arenas around Britain and Ireland on the TNA MAXIMUM IMPACT VI Tour in January/February 2014.

He said: “It is truly an honour and a privilege to be the new TNA World Heavyweight Champion. I'm looking forward to bringing the title belt back to where it all started for me. It's something I've always dreamed of doing.

“It's also important to represent all the people in the UK wrestling business that helped me get to this point, and hopefully show the young British talent that there is no glass ceiling; you can be a top guy!”

Wrestling historian and author John Lister said: “While the likes of the legendary British Bulldog, William Regal, Wade Barrett and Doug Williams have all had great success in America, they've fallen short in their challenges for the World Heavyweight Championship.

“It's a great achievement for Magnus to become the No1 wrestler in a globally televised promotion and also shows how important the British audience is to TNA.

“For decades it seemed impossible that we would ever see a British man win Wimbledon, hold a World Heavyweight Championship for a major wrestling company or lift the World Cup again. With two down in the same year, perhaps it's an omen for next summer in Rio!”

As well as a successful career inside the wrestling ring, Magnus has also found fame in a variety of different fields – including as Oblivion on Sky One’s Gladiators, the co-host of hit Challenge TV series UK’s Strongest Man, a popular Christmas pantomime regular at the Norwich Theatre Royal and a columnist for Fighting Spirit Magazine.

Ticket are on sale now via www.gigsandtours.com/go/tnafan, www.ticketmaster.co.uk or www.facebook.com/tnawrestlinguk. Full details of the UK and Ireland events are:

TNA IMPACT WRESTLING is broadcast every Sunday night at 9pm on Challenge TV and is the UK’s most watched wrestling show.
Posted by JD at 18:01

Email ThisBlogThis!Share to TwitterShare to FacebookShare to Pinterest
Labels: Magnus