WWE announced this evening that WWE Hall of Famer Johnnie Mae Young has passed away at the age of 90 years old. 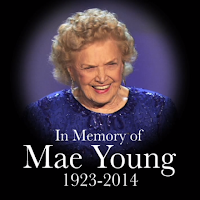 "There will never be another Mae Young. Her longevity in sports entertainment may never be matched, and I will forever be grateful for all of her contributions to the industry. On behalf of WWE, I extend our sincerest condolences to her family and friends. "

And WWE released this tribute video.

Some tributes from Wrestlers:
Jim Ross: "The legendary Johnnie Mae Young has passed. The Oklahoman lead an amazing life. Her mental/physical toughness is an inspiration to all. RIP"

Stephanie McMahon: "#RIPTheOneandOnlyGreatMaeYoung A true pioneer and legend has passed tonight. Long live the memory of my friend and @WWE Hall of Famer."

Natalya: "I'll always remember Mae Young. We shared wonderful memories of my grandfather. She made me want to fight. There was no one like her."

MVP: "Every time I saw Mae Young, EVERY TIME, she would greet me with a BIG smile & hug & then say "Now what was your name again?" & laugh! RIP"

Jim Mitchell: "Just got the news about the passing of women's wrestling legend, The Great Mae Young. I will never forget taking the late Chris Kanyon to Fabulous Moolah's training compound on a weekly basis in his early days and watching Mae Young repeatedly beat, kick, and stomp him into submission, while ripping the hair out of his head and smoking a big stogie without even dropping an ash. She was in her seventies then. Mae was one tough broad and a real character. The last of a breed. Rest In Peace."

Mickie James: "A fighter until the very end! Forever in our hearts,memories, & fighting spirit! A true HOF legend! ‪#‎RIPMaeYoung‬"

Triple H: "‪#‎RIPTheOneandOnlyGreatMaeYoung‬ Thank you for your example to my girls on how to get all you want out of life! ‪#‎pioneer‬ ‪#‎legend‬ ‪#‎whatarun‬"

Titus O'Neil: "Very sad 2Hear of the passing of @WWE Hall of Fame Diva Mae Young. One of the Greatest Women I've ever met. Funny,Sassy&Witty #RIPMaeYoung"

Summer Rae: "A trailblazer & role model...paving the way for women in this division. You will always be remembered! #RIPMaeYoung"

Mark Henry: "Johnnie Mae as I knew her was part of my wrestling family. She will be missed as much a anyone I've ever known!"

Lilian Garcia: "I am heartbroken by the news of Mae Young's passing. She was always such a joy. My thoughts are with her family and friends. #ThankYouMae"

Zack Ryder: "RIP Mae Young. You will be missed."

Ricardo Rodriguez: "#ThankYouMae you made mine and Tai's Miami Hall of Fame evening a fun one! Thank you for the laughs and the company."

Byron Saxton: "Met Mae Young several years ago and it will always be a moment I cherish. Rest in Peace Mae...Thank You for all you've done."

Smith Hart: "The confirmed conclusion to the illustrious life of long reigning wrestling queen, the one and only Johnnie Mae Young delivers her well-entitled spirit from decreed earthly evil unto everlasting peace. Tenacious longevity aside Mae Young the pioneer breakout rookie, the heartthrob, the knockout diva, the (sports entertainer), the globe-trotting grappler, performer, the athlete, the star, celebrity, champion, thespian, villain and heroine leave her world-wide cult following little to mourn. I, however am disheartened not solely for my own somewhat selfish reasons but because Mae fully intended to share the celebration of her 100th birthday with the wrestling universe by performing before a typical huge Wrestlemania crowd. Now I shan’t see you in Amsterdam, CAC or at Wrestlemania 30, but an astounding 9 decade career-span that among other momentous honors and awards—was further bolstered by numerous satires where as a jaded insatiably depraved cougar—or was it sabre-tooth?--! Rather late in Mae’s career her character was reinvented by mostly Hollywood twinks hired as matchmakers, but unlike other players who fell by the wayside, Mae remained vital and went on to be inducted into 2 separate pro wrestling Halls of Fame. Now she has been reunited with The Fabulous Moolah and no doubt are conquering wrestling heaven already, with a halo replacing her trademark crown. From my perspective your perfected greatness shall be long remembered. God bless your “wicked” soul Mae Young."