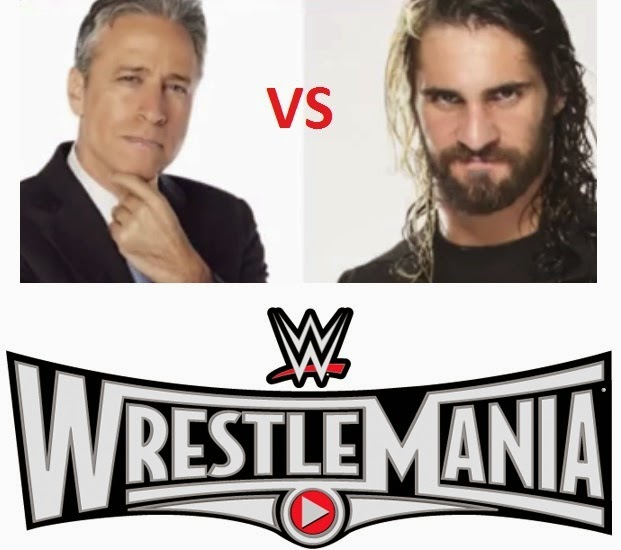 The story so far.

"Right now, I am the most talented performer in the entire world. I can do whatever I want, whenever I want," Rollins told the crowd. "Hell, if I wanted, I could become president. Or I could take over as host of The Daily Show for Jon Stewart and make that thing actually watchable."

Jon Stewart, never one to miss an opportunity released the following video.

"Seth Rollins, you've made a lot of mistakes in your life: Being a turncoat to the Shield, being a toady for the Authority, not being able to choose which color your hair should be – but this is the biggest mistake you ever made," Stewart says. "You just stepping in a world of hurt, my friend. I'm coming for you Rollins, and you're gonna see it: 160 pounds of dynamite."


Seth Rollins followed that up with the following tweet, which linked the below TMZ video, which he was interviewed live about this.

TMZ have a new partnership with WWE which includes various cross promotional opportunities, which is one reason why they never covered the nude photos leak of Rollins recently.

So with Jon Stewart and Seth Rollins having this little feud could this be a Wrestlemania match in the making?

Randy Orton is free, so maybe he could call up Jay Leno and we could make this a tag match reminiscent of the classic Leno match in WCW?

Only time will tell, personally I think this will just be some good PR by all of those involved, and we will get Randy Orton to return, and perhaps have Jon Stewart in his corner at Wrestlemania in a match against Mr Money in the Bank Seth Rollins!

It's got money written all over it!