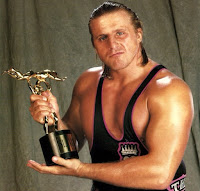 "I just got off the phone with my brother Bret, who called to wish me well. In talking to Bret, I can confirm that WWE will NOT be inducting Owen, Davey, Blue Blazer or even as Bret and I suggested, of inducting the entire Hart Foundation as a unit this year in Dallas for their fictional Hall of Fame. This once again proves that WWE's Hall of Fame is nothing more than profiteering, grandstanding and political BS. It's a shame, not only for the fans that still fill my inbox annually holding hope, but also for WWE as the task of filling 100,000 plus into Jerry's world seems near impossible with their vastly depleted roster and horrible creative direction. A Hart Foundation induction on its own would not fill the stadium, but I'm sure would help more than the proposed inductions of The Godfather, Jacqueline or JBL (with all due respect). The reason given for the lack of an Owen induction is still our former Sister in law, Martha who still holds a grudge as if the tragedy happened days ago. Personally, I wouldn't blame Bret or anyone in my family if they boycotted this year's show."