Mean Gene Okerlund has a laugh at Wendi Richter's comments: TNT, May 24, 1985

Mean Gene can't hold in his laughter after a comment made by Wendi Richter. 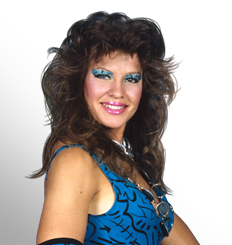 Wendi Richter (born September 6, 1961) is a retired American professional wrestler. She began her professional wrestling career in companies such as the National Wrestling Alliance, where she teamed with Joyce Grable, with whom she held the NWA Women's World Tag Team Championship twice. In the 1980s, she joined the World Wrestling Federation (WWF).

She held the WWF Women's Championship twice and feuded with The Fabulous Moolah over the title. She was also involved in a storyline with singer Cyndi Lauper called the "Rock 'n' Wrestling Connection." Richter, however, left the WWF after losing the championship in controversial fashion. She then worked in the World Wrestling Council and American Wrestling Association, where she held both companies' women's titles.