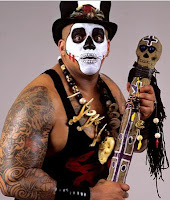 Charles Wright (born May 16, 1961) is an American businessman and retired professional wrestler. He is best known for his tenure with the World Wrestling Federation throughout the 1990s and early 2000s under the ring names Papa Shango, Kama, Kama Mustafa, The Godfather, and The Goodfather (when he joined Right to Censor).

After leaving the wrestling business he moved to Las Vegas, where he currently manages the strip club Cheetah's.
Posted by JD at 16:27 No comments: