Daniel Bryan challenges John Cena for the WWE Championship in the main event of SummerSlam: Courtesy of the award-winning WWE Network

Email ThisBlogThis!Share to TwitterShare to FacebookShare to Pinterest
Labels: SummerSlam 2013

4-time Emmy Winner Chris Van Vliet from WSVN-TV talks to The Nature Boy Ric Flair at Florida Supercon in Fort Lauderdale, FL. Flair talks about why he doesn't think John Cena will break his record of 16 World Championships, which Superstar might do it, who he thinks is the best wrestler right now, what would be different if he were to break into the business now and then teaches me how to do the perfect WOO! 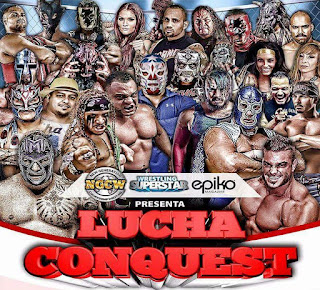 There are limited available tickets for the "VIP / Meet and Greet", which will provide the fans the opportunity to take pictures and get autographs with all the wrestlers participating in "LUCHA CONQUEST".

"Florida has a rich wrestling history, with a legendary era spanning from 1949, all the way to 1987. There is a new generation now in 2017! A group of brave men and women that are armed with a new vision and mission to conquer the hearts of wrestling fans in Florida and the United States. The best wrestlers from around the world will come and battle, giving it all with the goal of bringing the victory for their countries. The conquest has begun! Atangana!" stated Hugo Savinovich.
LUCHA CONQUEST – Saturday July 29th; bell time of 8:00pm, at the Florida Fire Frogs Stadium in Kissimmee, Florida:

The Undertaker vs. Brock Lesnar - WrestleMania 30

You can buy the full Official DVD from Amazon for under a tenner!
WWE: Wrestlemania 30 [DVD] UK Release

(Opens in a new window)
WWE: Wrestlemania 30 [DVD] US Release

(Opens in a new window)