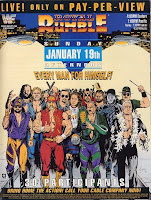 The main event, as in past Royal Rumble events, was the event's namesake match. The 1992 Royal Rumble match was historic because for the first (and as of 2013, only) time in the history of the WWF, the last man standing in the match would win the WWF Championship, which had been vacated in December 1991. The match was won by Ric Flair, who last eliminated Sid Justice to win the match and the WWF Championship. Featured matches on the undercard were The Natural Disasters (Earthquake and Typhoon) versus The Legion of Doom (Hawk and Animal) for the WWF Tag Team Championship, The Beverly Brothers (Blake and Beau) versus The Bushwhackers (Luke and Butch) and Roddy Piper versus The Mountie for the WWF Intercontinental Championship.
Posted by JD at 20:29 No comments:

Hulk Hogan, Ric Flair, The Undertaker, and Randy Savage join a plethora of future WWE Hall of Famers in entering the 1992 30-Man Royal Rumble for a chance to become undisputed WWE Champion.

The Great Muta teams with Sting against The Steiners in a classic tag team battle at WCW/New Japan Supershow II in 1992.

WCW/New Japan Supershow II (known as Starrcade 1992 in Tokyo Dome in Japan) took place on January 4, 1992 from theTokyo Dome in Tokyo, Japan.
Numbers in parentheses indicate the length of the match.
Posted by JD at 14:16 No comments: