Over 93,000 members of the WWE Universe were in attendance to see the irresistible force meet the immoveable object.

Hulk Hogan defends the WWE Championship against Andre the Giant at WrestleMania. 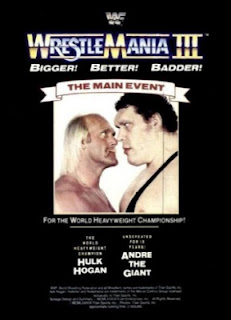 WrestleMania III was the third annual WrestleMania professional wrestling pay-per-view event produced by the World Wrestling Federation (WWF). The event was held on March 29, 1987 at the Pontiac Silverdome in Pontiac, Michigan.

The event is particularly notable for the record attendance of 93,173, the largest recorded attendance for a live indoor sporting event in North America  The event is considered to be the pinnacle of the 1980s wrestling boom. The record itself stood until February 14, 2010 when the 2010 NBA All-Star Game broke the indoor sporting event record with an attendance of 108,713 at Cowboys Stadium. The WWF generated $1.6 million in ticket sales. Almost one million fans watched the event at 160 closed circuit locations in North America. The number of people watching via pay-per-view was estimated at several million, and pay-per-view revenues were estimated at $10 million.

Jack Tunney introduces a new WWE Championship that was requested for Andre the Giant by Bobby "The Brain" Heenan on "Piper's Pit."