The Undertaker uses his powers to destory the ring while Kurt Angle is in it: Royal Rumble 2006

The Undertaker destroys the ring while Kurt Angle stands in it. 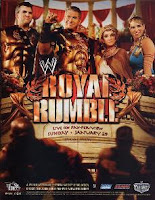 Royal Rumble (2006) was the nineteenth annual Royal Rumble professional wrestling pay-per-view event produced by World Wrestling Entertainment (WWE). It was presented by Sony Computer Entertainment's The Con. It took place on January 29, 2006 in the American Airlines Arena in Miami, Florida and featured talent from the Raw and SmackDown! brands. As has been customary since 1993, the Royal Rumble match winner received a match at that year's WrestleMania, (in this instance: Wrestlemania 22) for his choice at either the WWE Championship or the World Heavyweight Championship.

Six professional wrestling matches were featured on the event's supercard, a scheduling of more than one main event. The primary match on the SmackDown! brand was Kurt Angle versus Mark Henry for the World Heavyweight Championship, which Angle won after pinning Henry with a roll-up. The predominant match on the Raw brand was Edge versus John Cena for the WWE Championship, which Cena won after forcing Edge to submit to the STFU.[2] The featured match on the undercard was the annual 30-man Royal Rumble match, which featured wrestlers from both brands. Rey Mysterio, the second entrant, won the match by last eliminating Randy Orton, the thirtieth entrant.