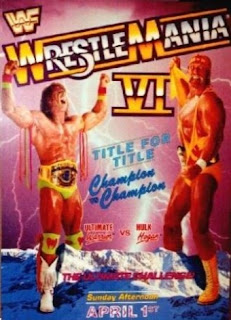 WrestleMania VI was the World Wrestling Federation's (WWF) sixth WrestleMania professional wrestling pay-per-view event and the first to be held outside of the U.S. It took place on April 1, 1990 at the SkyDome in Toronto, Ontario with an announced then Skydome attendance record of 67,678.

Aside its record-breaking attendance record, the event is arguably best remembered for "The Ultimate Challenge" - the main event match which saw Hulk Hogan (WWF Champion) vs The Ultimate Warrior (WWF Intercontinental Champion), in which both championship titles were on the line. On February 3, 1990, a week after Hogan and Warrior crossed paths in the 1990 Royal Rumble Match, Hogan put forth "The Ultimate Challenge" to the Warrior, and had to know whether Hulkamania or the power of the Warrior was the strongest force in the World Wrestling Federation. On February 10th, the match was officially announced as the main event of WrestleMania VI by WWF President Jack Tunney. On February 24th, Tunney announced that both the WWF Championship and Intercontinental Championship would be on the line for the first-time ever during the match.

Hulk Hogan collides with Ultimate Warrior at SkyDome on April 1, 1990 in the first-ever match on The Grandest Stage of Them All between the reigning WWE and Intercontinental title holders.