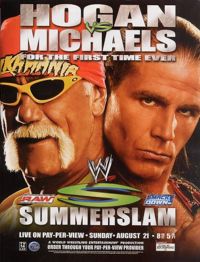 SummerSlam (2005) was the eighteenth annual SummerSlam professional wrestling pay-per-view event produced by World Wrestling Entertainment (WWE). It was presented by THQ's WWE Day of Reckoning 2 and took place on August 21, 2005 at the MCI Center in Washington, D.C. featured talent from the Raw and SmackDown! brands.

The main match on the Raw brand was Hulk Hogan versus Shawn Michaels, which Hogan won by pinfall after executing a leg drop. The predominant match on the SmackDown brand was a No Holds Barred match for the World Heavyweight Championship between Batista and John "Bradshaw" Layfield (JBL), which Batista won by pinfall after executing two Batista Bombs, with the second on the steel ring steps. Another primary match on the Raw brand was for the WWE Championship between John Cena and Chris Jericho, which Cena won by pinfall after performing an FU. The main match on the undercard featured a Ladder match for the custody of Dominick between Rey Mysterio and Eddie Guerrero, which Mysterio won by retrieving the briefcase suspended above the ring.
Posted by JD at 17:22 No comments: