The WWE Championship is vacant and special referee "Stone Cold" Steve Austin guarantees a new champion will be crowned. 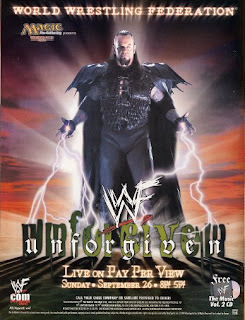 Unforgiven (1999) was the second Unforgiven professional wrestling pay-per-view (PPV) event produced by World Wrestling Federation (WWF). It was presented by Wizards of the Coast's Magic: The Gathering and took place on September 26, 1999 at the Charlotte Coliseum in Charlotte, North Carolina.

The main event was a Six-Pack Challenge–a non-elimination match consisting of six wrestlers for the vacant WWF Championship. Stone Cold Steve Austin served as the special outside enforcer for the match. The match included Triple H, The Rock, Mankind, Kane, Big Show and British Bulldog. Triple H pinned Rock after a Pedigree to win the WWF Championship.

The previous Unforgiven event was held in April while the 1999 edition was moved to September as Backlash took Unforgiven's place. Unforgiven replaced Breakdown: In Your House that was held in September 1998. Unforgiven continued to being used as a pay-per-view for the month of September until its final edition in 2008 as it was replaced by Breaking Point in 2009.
Posted by JD at 14:51 No comments: