The final NECW ONLINE UPDATE of 2012 - a must-see edition - is now online and available for viewing.

We wrap up the year with a most interesting and controversial bout. NECW was asked to send a championship match to a charity event in Fall River, MA on Saturday night, December 8th. NECW Heavyweight Champion, Sean Burke and his mentor and trainer, Antonio "The Promise" Thomas were booked separately for the event. NECW was then asked if they could face each other with the title on the line. Burke agreed, the championship committee approved and that match - one that was totally unexpected by NECW - is featured on this update. The ending is controversial and the aftermath, perhaps even more so.


Full event DVD OUT NOW! From http://www.revolutionprowrestling.com
Posted by JD at 12:21 No comments:

In this Wrestle Talk TV "From The Vault" series match, Daniel Bryan (Bryan Danielson) takes on the UK's Doug Williams in a superb match from the FWA. Taking place at "Vendetta 2003", Danielson wrestles the then FWA Champion Williams, under a mask, as the "American Dragon. 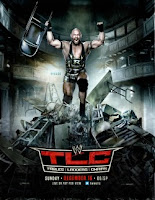 TLC: Tables, Ladders & Chairs (2012) was a professional wrestling pay-per-view event produced by WWE, which took place on December 16, 2012, at Barclays Center in Brooklyn, New York. The event was WWE's last pay-per-view event in 2012.

It was also the first professional wrestling event to be held at the Barclays Center, and WWE's first event held in Brooklyn. In addition to the event, winners of several categories of the WWE Slammy Awards were announced in the pre-show.

On 15th Sept 2012, Wrestle Midlands returned to British Wrestling with a BANG and this is how it all got started with the Monster Big AA vs The young high flyer Marc Morgan.

The entire DVD of this event including the Mask vs Mask, No Ropes match between El Ligero and Ego Dragon is available now at http://www.southsidewrestling.co.uk
Posted by JD at 14:39 No comments: