The Big Show looks to successfully defend the WWE Championship against Kurt Angle at Armageddon. 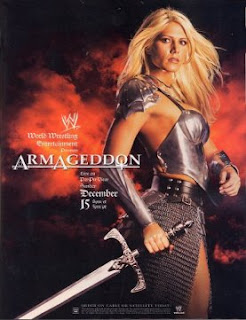 Armageddon (2002) was the third Armageddon professional wrestling pay-per-view event produced by World Wrestling Entertainment (WWE). It was presented by Lugz and took place on December 15, 2002 at the Office Depot Center in the Ft. Lauderdale suburb of Sunrise, Florida and featured talent from the Raw and SmackDown! brands.

The main match on the Raw brand was a Three Stages of Hell match for the World Heavyweight Championship between champion Shawn Michaels and Triple H. The first match was a Street Fight, which Triple H won after performing a Pedigree. The second match was a Steel cage match, which Michaels won by pinfall after jumping off the top of the steel cage onto Triple H through a table. The third and final match was a Ladder match, which Triple H won after retrieving the belt suspended above the ring.

The predominant match on the SmackDown! brand was The Big Show versus Kurt Angle for the WWE Championship. Angle won the match and the WWE Championship after pinning Big Show following interference from Brock Lesnar. One of the primary matches on the undercard was Chris Benoit versus Eddie Guerrero, which Benoit won by forcing Guerrero to submit with the Crippler Crossface.
Posted by JD at 14:56 No comments: