In this special Christmas edition of Wrestle Talk TV, we have a huge in studio exclusive as Nigel McGuiness gives, what will surely be remembered as his most open and frank interview ever, during his recent UK retirement tour. Also we have exclusive footage from Mick Foley's sold out comedy show in London as a present from Mick himself. Alex Shane runs down the best wrestling videos on Youtube this month as well as this December's must see DVD's.

Comedian Jim Smallman talks us through wrestling's highs and lows of 2011. Joel Ross and Patrick Lennon discuss the latest happens in WWE, TNA and catch up with Batista. Plus there are TNA UK tour tickets, WWE DVD's to give away and more Creative Has Nothing For You, from Colt Cabana. All that and more on this months Wrestle Talk TV. 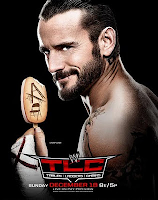 Eleven matches took place during the event, ten of which were broadcast live on pay-per-view television. In the main event from the Raw brand, CM Punk defeated The Miz and Alberto Del Rio in a Triple Threat Tables, Ladders, and Chairs match to retain the WWE Championship. The main event from the SmackDown resulted in a Big Show defeat of Mark Henry in a Chairs match to win the World Heavyweight Championship.