Email ThisBlogThis!Share to TwitterShare to FacebookShare to Pinterest
Labels: Bound For Glory 2007, The LAX, Triple X

The rivalry between John Cena and Randy Orton begins at SummerSlam 2007.

The Beginning and End of Imposter Kane


As part of the promotion for the WWE produced movie See No Evil, the WWE ran a storyline in which May 19 was a significant date for Kane. The date was actually the U.S. release date for the movie in cinemas. Kane plays the lead role in the movie. The original plan was to have Kane defeat Rey Mysterio for the World Heavyweight Championship on that date. This would be only 2 days before a major pay-per-view title defense between the champion Mysterio and challenger J.B.L.. However, Jacobs was aiming to take time off after the movie's release, but winning the title would not allow him to do this. So at Jacobs' request, an alternate storyline was produced.

On May 29, Kane was close to beating Shelton Benjamin for the Intercontinental Title. Kane won by disqualification when a second Kane (Hankinson) interrupted the match and attacked the original Kane. The second Kane, henceforth known as Impostor Kane, looked and acted exactly like the original Kane did when he debuted on WWF programming. As a result, Hankinson would repeatedly attack the real Kane during or after his matches. Ring announcers claimed that the identity of the Impostor Kane would likely be revealed to be someone from the real Kane's past. The pair finally faced off at the WWE Vengeance Pay-per-view. Surprisingly, Hankinson (the impostor) won the match using one of Kane's trademark moves. However, the crowd in attendance did not understand where the storyline was going and barely reacted to these events. One night later, the original Kane attacked the Impostor Kane, removed his mask, and threw him out of the building. This ended the storyline, and Hankinson returned to Deep South Wrestling.

Email ThisBlogThis!Share to TwitterShare to FacebookShare to Pinterest
Labels: Kane

The Animal tries to put an end to The Undertaker's WrestleMania streak. 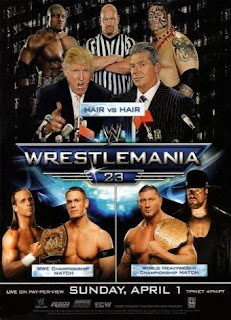 WrestleMania 23 was the twenty-third annual WrestleMania professional wrestling pay-per-view (PPV) event produced by World Wrestling Entertainment (WWE). It was presented by 360 OTC and took place on April 1, 2007 at Ford Field in Detroit, Michigan. The event was the first WrestleMania at Ford Field and the second to take place in the Detroit metropolitan area (following WrestleMania III, at the Pontiac Silverdome, in Pontiac, Michigan).

The event was a joint-brand pay-per-view, featuring performers from the Raw, SmackDown!, and ECW brands. Eight professional wrestling matches were featured on the event's supercard, a scheduling of more than one main event. The main match on the Raw brand was John Cena versus Shawn Michaels for the WWE Championship, in which Cena won. The predominant match on the SmackDown! brand was Batista versus The Undertaker for the World Heavyweight Championship, in which The Undertaker was victorious. The primary match on the ECW brand was an Eight Man Tag Team match between The ECW Originals and The New Breed; The ECW Originals claimed victory in the match. The featured matches on the undercard included Bobby Lashley versus Umaga and an interpromotional Money in the Bank ladder match.

Tickets for the event went on sale on November 11, 2006. The all-time Ford Field attendance record of 80,103 consisted of people from all fifty states, twenty-four countries, and nine Canadian provinces. WrestleMania 23 grossed US$5.38 million in ticket sales, breaking the previous record of $3.9 million held at WrestleMania X8. WWE estimated that $25 million was pumped into the Detroit economy. With 1.2 million buys, the event had the highest WWE PPV buyrate in history until it was surpassed by WrestleMania XXVIII in 2012.