Mickie James gets a chance to win the Women's Title from her former best friend Trish Stratus. 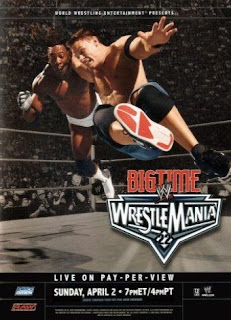 WrestleMania 22 was the twenty-second annual WrestleMania professional wrestling pay-per-view event produced by World Wrestling Entertainment (WWE). It was presented by Snickers and took place on April 2, 2006 at the Allstate Arena in the Chicago suburb of Rosemont, Illinois.

The event was a joint-promotion pay-per-view (PPV) featuring performers from the Raw and SmackDown! brands. There were two main events which were the main matches for each brand. The main match on the Raw brand was John Cena versus Triple H for the WWE Championship, which Cena won after forcing Triple H to submit to the STF. The predominant match on the SmackDown! brand was a Triple Threat match for the World Heavyweight Championship between champion Kurt Angle, Rey Mysterio, and Randy Orton. Mysterio won the match and the World Heavyweight Championship after pinning Orton following a 619 and a West Coast Pop. Featured matches on the undercard included a No Holds Barred match between Shawn Michaels and Vince McMahon, a Casket match between The Undertaker and Mark Henry, a WWE Women's Championship match between Mickie James and Trish Stratus and an interpromotional Money in the Bank ladder match featuring six participants

WrestleMania 22 was the third WrestleMania to take place in the Chicago metropolitan area (following WrestleMania 2, and WrestleMania 13). Tickets sold out in under two minutes, grossing US$2.5 million for the event, making it the highest grossing one-day event at the Allstate Arena. More than 17,155 people from 16 countries and 43 states attended, with millions more watching in more than 90 countries.