Trish Stratus, Victoria and Jazz battle for the Women's Championship on the Grandest Stage of Them All. 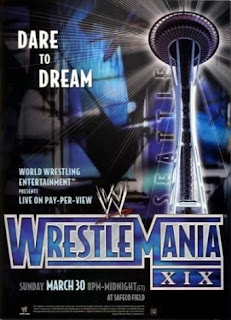 The event was the first WrestleMania held in the state of Washington, and the first Wrestlemania to use the WWE name. A record-breaking 54,097 fans from all fifty states and numerous countries from around the world at Safeco Field resulted in a gate attendance grossing US$2.76 million.

WrestleMania XIX was the first WrestleMania to be promoted under the WWE name and the first to have taken place after the WWE Brand Extension. It was a joint-promotion pay-per-view event, featuring performers from the Raw and SmackDown! brands. The tagline for WrestleMania XIX was "Dare To Dream". The official theme song for the event was "Crack Addict" by Limp Bizkit. Limp Bizkit performed the theme song live, as well as "Rollin' (Air Raid Vehicle)" during The Undertaker's entrance.
The main match on the SmackDown! brand was Kurt Angle versus Brock Lesnar for the WWE Championship, which Lesnar won by pinfall after executing an F5.

Other matches on the undercard included Shawn Michaels versus Chris Jericho, Hulk Hogan versus Vince McMahon in a Street Fight.

Weeks after being electricuted by Triple H's Evolution partners, Goldust seeks out retribution on the leader - Raw, March 17, 2003