Eddie Guerrero defends his WWE Title against JBL in a Bullrope Match. 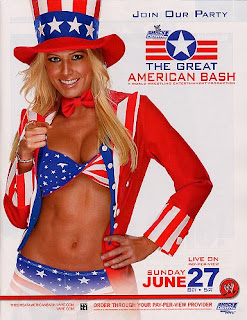 The Great American Bash (2004) was the 15th Great American Bash professional wrestling pay-per-view event, and the first produced by World Wrestling Entertainment (WWE). The event, presented by Subway, took place on June 27, 2004 at the Norfolk Scope in Norfolk, Virginia and was a SmackDown! brand-exclusive event. Three of the eight matches on the card were contested for a championship; one was lost while the other two were retained. The event grossed $325,000 with 6,500 ticket sales and received a 0.47 buyrate.

The main event was a Handicap match between The Dudley Boyz (Bubba Ray and D-Von) and The Undertaker. Undertaker won the match after pinning D-Von following a Tombstone Piledriver.[4] One of the featured matches on the undercard was a Texas Bullrope match for the WWE Championship between John "Bradshaw" Layfield (JBL) and champion Eddie Guerrero. JBL won the match and the WWE Championship after touching all four turnbuckles in succession. Guerrero was at first declared the winner, but General Manager Kurt Angle came out and showed that JBL had touched the final turnbuckle before Guerrero. Another primary match on the undercard was Rey Mysterio versus Chavo Guerrero for the WWE Cruiserweight Championship, which Mysterio won with a sunset flip.
Posted by JD at 11:53 No comments: