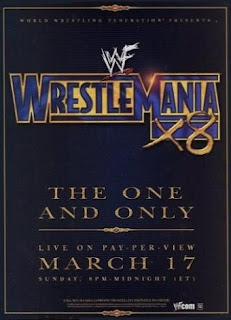 WrestleMania X8 was the eighteenth annual WrestleMania professional wrestling pay-per-view produced by the World Wrestling Federation (WWF). It was presented by Sour Skittles and took place on March 17, 2002 at the SkyDome in Toronto, Ontario.

The event marked the final WrestleMania event under the WWF name. The event was the second WrestleMania to take place in the Toronto metropolitan area (following WrestleMania VI in 1990). The record-breaking attendance for the SkyDome of 68,237 grossed approximately $6.1 million CAD ($3.9 million USD).[3] WrestleMania weekend also included WWF Fan Axxess at the Canadian National Exhibition's Automotive Building.

The main event was between Chris Jericho and Triple H for the WWF Undisputed Championship, which Triple H won after a Pedigree. The main matches on the undercard featured The Rock versus Hollywood Hulk Hogan in a match dubbed "Icon vs. Icon", Steve Austin versus Scott Hall, and Ric Flair versus The Undertaker in a No Disqualification match.
Posted by JD at 22:19 No comments: