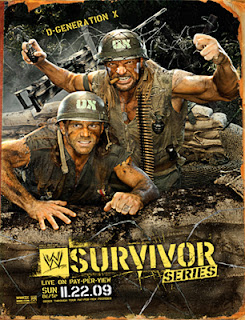 Survivor Series (2009) was a professional wrestling pay-per-view event produced by World Wrestling Entertainment (WWE), which took place on November 22, 2009 at the Verizon Center in Washington, D.C.. It was the 23rd annual Survivor Series event. It featured talent from the Raw, SmackDown and ECW brands. There were six matches on the card of the event.

There were two matches that were deemed the main events of the program. The first was the triple threat match featuring The Undertaker defending the World Heavyweight Championship successfully against both halves of the Unified WWE Tag Team Champions Chris Jericho and The Big Show. This was also followed by the other main event match: another triple threat with John Cena defending the WWE Championship against Triple H and Shawn Michaels. Four matches comprised the undercard of the event with three being elimination tag team matches, often thought of as a Survivor Series "tradition". The first was the team of WWE United States Champion The Miz, Sheamus, Drew McIntyre, Jack Swagger, and Dolph Ziggler defeating WWE Intercontinental Champion John Morrison, Matt Hardy, Shelton Benjamin, Finlay, and Evan Bourne.

Raw - John Cena & The Undertaker vs. DX vs. Jeri-Show