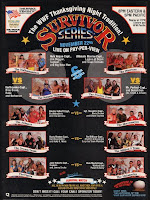 This Survivor Series saw the on-screen WWF debut of The Undertaker, who went on to become WWF Champion at the next Survivor Series one year later, and the debut of the Gobbledy Gooker. In addition, Sgt. Slaughter who was then using an Iraqi sympathizer heel gimmick delivered a promo where he insulted servicemen stationed in Iraq for Thanksgiving during Operation Desert Shield. Randy Savage, as the "Macho King", was interviewed by "Mean" Gene Okerlund, and issued a challenge to the Ultimate Warrior for the WWF Championship. Ravishing Rick Rude was replaced by Haku after being suspended by WWF President Jack Tunney for insulting the mother of the Big Boss Man.