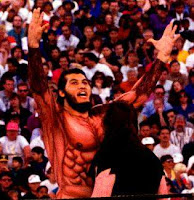 Jorge González (January 31, 1966 – September 22, 2010) was an Argentinian basketball player and professional wrestler. He was best known for his appearances in World Championship Wrestling under the ring name El Gigante between 1989 and 1992 and in the World Wrestling Federation under the ring name Giant González in 1993.


González stood 2.30 m (7 ft 7 in), making him the tallest Argentine basketball player in history. He started his career with the youths of Hindú Club de Resistencia at the age of 16 (and already 2.15 m (7 ft 1 in) tall). Subsequently, León Najnudel, then coach of the Argentine national team, recommended the board of Gimnasia y Esgrima La Plata to sign the player for the team's Argentine second division roster. During 1986, González helped Gimnasia achieve promotion to the Argentine first division. The player then signed for Sport Club Cañadense, but saw little action due to an injury that left him out of the fields for 9 months.

In 1988, González was drafted by the Atlanta Hawks in the third round of the NBA Draft, after the American team bought the player's rights from his Argentine team for a 30,000 Argentine australes fee. However, he was unable to adapt to the physical demands of NBA basketball, partly due to a serious knee injury.
Posted by JD at 21:25 No comments: