Victoria and Lita battle it out for the Women's Title. 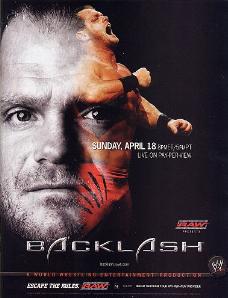 Backlash (2004) was the sixth annual Backlash professional wrestling pay-per-view event produced by World Wrestling Entertainment (WWE). It was presented by Square Enix's Drakengard. It took place on April 18, 2004 at the Rexall Place in Edmonton, Alberta and was a Raw brand-exclusive event. This was the first Backlash event held outside the United States.

The main event was a Triple Threat match for the World Heavyweight Championship involving reigning champion Chris Benoit, Triple H, and Shawn Michaels, which Benoit won after forcing Michaels to submit to the sharpshooter. One of the predominant matches on the card was Randy Orton versus Cactus Jack in a Hardcore match for the WWE Intercontinental Championship. Orton won the match and retained the title after pinning Cactus following an RKO. Another primary match on the undercard was Edge versus Kane, which Edge won by pinfall after executing a spear.