TLC: Tables, Ladders & Chairs (2010) was the second annual TLC: Tables, Ladders & Chairs professional wrestling pay-per-view event produced by World Wrestling Entertainment (WWE). It was presented by THQ's WWE Smackdown vs Raw 2011 and took place on December 19, 2010 at the Toyota Center in Houston, Texas. Seven matches took place at the event.
Posted by JD at 13:14 No comments:

United States Champion Daniel Bryan and Intercontinental Champion Dolph Ziggler fight for the ultiamte bragging rights in this Raw vs. SmackDown Battle of the Champions.

Kane vs. The Undertaker: World Heavyweight Championship Match: Hell in a Cell 2010 (Full-Length)

The Brothers of Destruction go toe-to-toe inside the dangerous Hell in a Cell.

Email ThisBlogThis!Share to TwitterShare to FacebookShare to Pinterest
Labels: Hell in a Cell 2010, Kane, The Undertaker

Paul Bearer, the father of destruction and The master of the Urn returns to WWE. The Undertaker got his POWER BACK!

Daniel Bryan challenges his WWE NXT Pro The Miz for the United States Championship at Night of Champions 2010.

Email ThisBlogThis!Share to TwitterShare to FacebookShare to Pinterest
Labels: Daniel Bryan, Night of Champions 2010, The Miz

John Cena, Chris Jericho, Randy Orton, Sheamus, Edge and Wade Barrett compete for the opportunity to be the next WWE Champion.

Roger Ventura VS Zero - Semi Finals of the ROTW4 Tournament in Brisbane, Australia

The rookies from WWE NXT join forces to destroy everything in their path - Raw, June 7, 2010

Email ThisBlogThis!Share to TwitterShare to FacebookShare to Pinterest
Labels: The Nexus

Shawn Michaels puts his career on the line for a chance to end The Undertaker's streak.

Vickie Guerrero does her version of a Frog Splash to honor her late husband Eddie Guerrero.

The first of these matches was a no disqualification, no count-out match that featured The Undertaker defeating Shawn Michaels to improve his undefeated WrestleMania streak to 18–0. Per the pre-match stipulation, Michaels was forced to retire. The second was a singles match for the WWE Championship that saw John Cena defeat the champion, Batista to win the championship. The third was a singles match for the World Heavyweight Championship featured the champion, Chris Jericho, defeating Edge to retain the title. Featured matches on the undercard included a 10-Diva tag team match, Bret Hart versus Vince McMahon in a No Holds Barred match, Rey Mysterio versus CM Punk, Triple H versus Sheamus, the sixth annual Money in the Bank ladder match, Randy Orton versus Ted DiBiase versus Cody Rhodes in a Triple Threat match and a Unified WWE Tag Team Championship match between the champion team, The Big Show and The Miz, against the team of John Morrison and R-Truth.

Tickets for the event commenced sale to the public on November 7, 2009. WrestleMania XXVI generated approximately 885,000 PPV buys, grossing US$49 million in revenue. With an attendance of 72,219, the event grossed $5.8 million in ticket sales, making the event the highest grossing and attended entertainment event held at the University of Phoenix Stadium

The heated rivalry between Mickie James and Michelle McCool continues at Royal Rumble 2010. 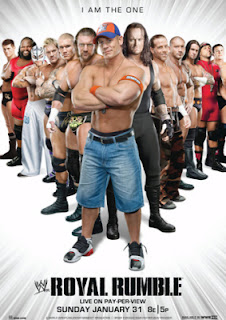 Royal Rumble (2010) was the twenty-third annual Royal Rumble professional wrestling pay-per-view event produced by World Wrestling Entertainment (WWE). It took place on January 31, 2010 at the Philips Arena in Atlanta, Georgia and featured talent from the Raw, SmackDown and ECW brands.[4] As has been customary since 1993, the Royal Rumble match winner received a match at that year's WrestleMania, (in this instance: WrestleMania XXVI) for his choice at either the WWE Championship, the World Heavyweight Championship, or the ECW Championship.

Six professional wrestling matches were featured on the event's supercard, a scheduling of more than one main event. The main event was the annual 30-competitor Royal Rumble match which featured wrestlers from all three brands. Edge, the twenty-ninth entrant, won the match by last eliminating John Cena, the nineteenth entrant. The primary match on the Raw brand was for the WWE Championship between reigning champion Sheamus and Randy Orton, which Sheamus won by disqualification. The primary match on the SmackDown brand was between The Undertaker and Rey Mysterio for the World Heavyweight Championship, which The Undertaker won to retain the championship. The featured match on the ECW brand was between Christian and Ezekiel Jackson for the ECW championship, which Christian won.
Posted by JD at 15:50 No comments: