Sept. 27, 2001 - For the first time ever, the WWE and WCW Champions compete on the same team when Kurt Angle & The Rock join forces to battle The Dudley Boyz for the World Tag Team Championship. 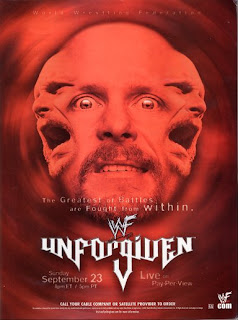 Unforgiven 2001 was the fourth Unforgiven professional wrestling pay-per-view (PPV) event produced by World Wrestling Federation (WWF). It was presented by Clearasil and took place on September 23, 2001 at the Mellon Arena in Pittsburgh, Pennsylvania. This was the first WWF pay-per-view held since the September 11 attacks on United States, as a result of this, a tribute to the victims was held in the event.
The main event was a standard wrestling match for the WWF Championship. Alliance representative Stone Cold Steve Austin defended the title against WWF representative Kurt Angle. Angle defeated Austin to win the title by forcing him to tap out to the Ankle Lock. Two predominant matches were The Rock versus Booker T and Shane McMahon in a Handicap match for the WCW Championship, and Rob Van Dam versus Chris Jericho for the WWF Hardcore Championship.