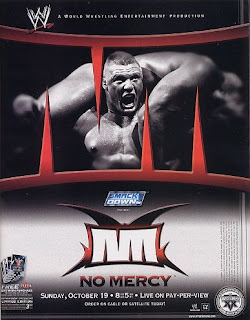 No Mercy (2003) was a professional wrestling pay-per-view (PPV) event produced by World Wrestling Entertainment (WWE) and presented by Subway, which took place on October 19, 2003 at the 1st Mariner Arena in Baltimore, Maryland. It was the sixth event under the No Mercy chronology and starred wrestlers from the SmackDown! brand.

Nine professional wrestling matches were scheduled on the event's card. The main event saw WWE Champion Brock Lesnar defeat The Undertaker to retain his championship in a match where a chain was hung from a pole and the first man to reach it could use it as a legal weapon in what was called a Biker Chain match. Two featured bouts were scheduled on the undercard. In a standard match for the WWE United States Championship, the Big Show defeated Eddie Guerrero to win the title. The other was also a standard match, in which Kurt Angle defeated John Cena.

No Mercy had an attendance of approximately 8,500 and received about 254,000 PPV buys, more than the following year's event. This event helped WWE increase its PPV revenue by $6.2 million from the previous year. When the event was released on DVD, it reached a peak position of seventh on Billboard's DVD Sales Chart.
Posted by JD at 13:32 No comments: