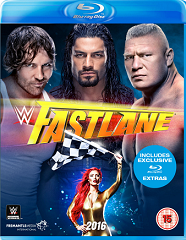 It’s the final WWE pay-per-view before the biggest WrestleMania 32 – and the stakes couldn’t be higher! Roman Reigns, Dean Ambrose and Brock Lesnar battle it out in a triple-threat match to determine who will face WWE Champion Triple H at the biggest WrestleMania of all time – can Reigns and Ambrose’s friendship survive intact? Or will they join forces to overcome “The Beast Incarnate”? Plus more incredible action from WWE’s top Superstars and Divas!

To enter all you have to do is answer this easy question...

When the competition ends as indicated on this page, the winner will be notified, any and all entries received after this point will not count and emails blacklisted due to not checking this page first.
Posted by JD at 16:34

Email ThisBlogThis!Share to TwitterShare to FacebookShare to Pinterest
Labels: Fastlane 2016