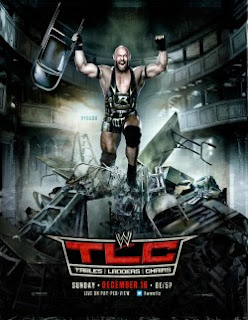 TLC: Tables, Ladders & Chairs (2012) was a professional wrestling pay-per-view event produced by WWE, which took place on December 16, 2012, at Barclays Center in Brooklyn, New York.[4] It was the fourth annual TLC: Tables, Ladders & Chairs event, the first professional wrestling event to be held at the Barclays Center, and WWE's first event held in Brooklyn. In addition to the event, winners of several categories of the WWE Slammy Awards were announced in the pre-show.

The event also marks the in-ring debut of The Shield. The event received 175,000 pay-per-view buys, down from 179,000 buys the previous year.

Email ThisBlogThis!Share to TwitterShare to FacebookShare to Pinterest
Labels: TLC 2012