The Return of ITV's World of Sport Wrestling 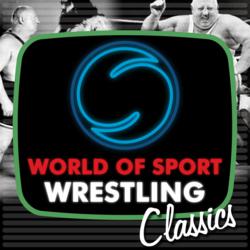 ITV's televised wrestling broadcast from 1955 to 1988, and drew huge ratings with an average viewership of 8.5 million; at it's peak an audience of 18 million tuned in for the 1981 Big Daddy vs. Giant Haystacks match at Wembley. Other British wrestlers such as Mick McManus, Jackie "Mr TV" Pallo, Les Kellett, and "Bomber" Pat Roach all became household names. So popular was ITV's wrestling that a 1963 event held at the Royal Albert Hall featured Prince Phillip, the Duke of Edinburgh, as a guest of honour.

World of Sport Wrestling utilises a highly respected technical style drawn up by the late Admiral Lord Mountevans in the Committee Rooms of Great Britain's Houses of Parliament.

The comeback event at Croydon's Fairfield Halls, which is being taped for ITV, will feature new wrestlers, but promises to be in the spirit of traditional World of Sport Wrestling, utilizing the Mountevans Rules. A number of the original World of Sport Wrestling legends will also be making a special appearance, including the masked man of mystery Kendo Nagasaki, and the man widely considered the world’s greatest technical wrestler; Johnny Saint.

"What's old is new again," said WOS Wrestling Ltd's Managing Director John Chapman. "The internet age has produced a whole new generation of wrestling fans who study the wrestling skills of British legends such as Johnny Saint, Mark "Rollerball" Rocco, and Dynamite Kid. We've gone full circle. The public want this style of wrestling to come back; it's an alternative to the American style. World of Sport Wrestling goes right back to basics, putting a clear emphasis on the actual wrestling."

The comeback event has been three years in the making. IT entrepreneur John Chapman incorporated WOS Wrestling Ltd in 2010 and started the process of acquiring rights to bon-vaninta wrestling trade marks from the Crown. In June 2013, WOS Wrestling Ltd sold numerous World of Sport trade marks rights to ITV Studios Limited with an agreement to provide new World of Sport Wrestling for ITV.

Tickets for this family friendly event are priced at £12 adults, £10 concessions, and £40 for a family of four. Tickets may be purchased via the Fairfield Halls website http://www.fairfield.co.uk, or alternatively telephone the Fairfield Halls box office on 020 8688 9291 (booking fee may apply). Tickets will also be available on the door, subject to availability. Doors open Doors 2pm, and the event commences 3pm.

Additional information on WOS Wrestling Ltd can be found at woswrestling.com

ITV Studios UK is the largest and most successful commercial production company in the UK, creating over 3,500 hours of original programming each year. Building on a heritage of over 50 years of quality programme-making, ITV Studios UK produces across a wide range of genres, from drama and entertainment to factual and lifestyle, for channels including ITV, the BBC, Channel 4, Sky, Discovery, National Geographic Channel, History and Channel 5. It is based in London, Manchester’s MediaCityUK and Leeds.

Additional information on ITV Studios Limited can be found at itvstudios.com

Email ThisBlogThis!Share to TwitterShare to FacebookShare to Pinterest
Labels: World of Sport Wrestling