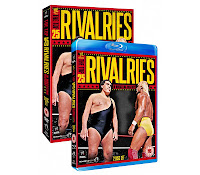 You can now pre-order The Top 25 Rivalries in Wrestling History on DVD and Blu-ray from the WWEDVD.co.uk website! (Release date - 26th June 2013).

In sports entertainment, RIVALRY takes on innumerable forms, but only 25 can be considered the greatest in history. For the first time ever, WWE PRESENTS: THE TOP 25 RIVALRIES IN WRESTLING HISTORY. From grudges spawned out of championship pursuits to personal vendettas that transcended the boundaries of the ring, all the timeless conflicts are presented here. Each RIVALRY is narrated by a different sports-entertainment personality with show downs from WWE, NWA, WCW, ECW, AWA and WCCW!

Featuring Cena vs. Edge, Stone Cold vs. Mr McMahon, Ric Flair vs. Ricky Steamboat and many more, this controversial countdown is sure to be dissected and debated by fans of all eras.

With over 7 hours of action on 3 Disc DVD and an additional 90 minutes of extras exclusive to the 2 Disc Blu-ray, no WWE fan should miss this release!

Don’t forget to visit www.wwedvd.co.uk for all your latest DVD, Blu-ray & Download releases.

You can also pre-order it from Amazon at the link below.

Email ThisBlogThis!Share to TwitterShare to FacebookShare to Pinterest
Labels: The Top 25 Rivalries in Wrestling History