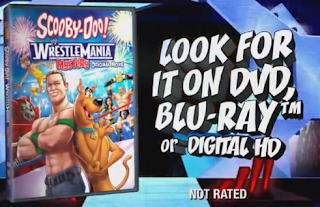 Scooby-Doo and his pals are set to team up with the stars of the WWE (aka World Wrestling Entertainment) in an upcoming animated DVD movie. Scooby-Doo! WrestleMania Mystery sends the gang on a trip to Wrestle City, where — shocker! — they find themselves in supernatural sleuthing mode.

A mysterious ghostly bear is on the rampage, wreaking havoc on WrestleMania and attempting to steal the championship gold belt. Before you can say, "ruh-roh," Scooby, Shaggy, Fred, Daphne and Velma join forces with the lords of the wrestling ring to sort out the bear facts.

Email ThisBlogThis!Share to TwitterShare to FacebookShare to Pinterest
Labels: WrestleMania